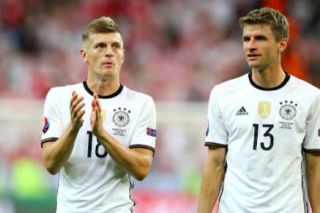 German greats Toni Kroos and Thomas Muller have revealed they have both come close to signing for Manchester United.

The duo were teammates at Bayern Munich during their hugely dominant era in the Bundesliga but were both heavily linked with a move to Old Trafford.

Kroos, 30, is still enjoying his time at Real Madrid and should be recognised as one of the best central midfielders of his generation. He is one of the most decorated footballers in the modern era having won the Champions League with Bayern and Real Madrid, as well as the World Cup in 2014.

But remarkably, he has revealed that David Moyes came very close to bringing him to Manchester during his brief spell as manager.

“David Moyes had come to see me and the contract had basically been done but then Moyes was fired and Louis van Gaal came in, which complicated matters,” Kroos told the Athletic.

“Louis wanted time to build his own project. I didn’t hear anything from United for a while and started having doubts. Then the World Cup started and [then Madrid manager] Carlo Ancelotti called. And that was it.”

Muller is another player that has been linked with a move to United over the years. He has been at Bayern all his career and was enjoying his best spell around four seasons ago when Louis Van Gaal was keen on bringing him to Old Trafford.

“Things were serious when Louis van Gaal came in [in 2015], for all sides involved,” Muller told the Athletic.

“I could imagine going to Man Utd then. But the club said: “We want you to stay”. I wasn’t out of contract, that’s why I it was pretty clear-cut in the end. But it wasn’t just a poker game.”

Realistically, Bayern Munich rarely let any of their top performing stars leave the club so there was no surprise that a move for Muller never materialised. The forward was a key player under Pep Guardiola during the Spaniard’s time at the Allianz Arena.

United’s last business with the Bundesliga giants was the move for Bastian Schweinsteiger. The midfielder was another generational talent, but was clearly way past his best when he made the switch under Louis Van Gaal.