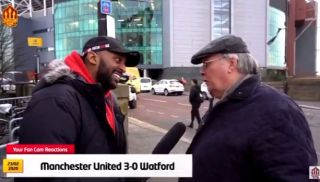 A Manchester United fan named Ricky seems to be getting a bit carried away after a few decent results.

In the video below he states that he’s struggling to think of a better left-back in the world than Luke Shaw.

Shaw’s form has picked up recently but I’d still start Brandon Williams over him at left-back. It’s good for the squad to have competition for places and maybe the emergence of Williams has acted as a kick up the backside for the former Southampton defender, who will also have one eye on the European Championships this summer.

Still, it will take more than a few games to really show anyone he’s improved.

Ricky is worth following on Twitter (@rickthereduk) for United-related opinions, even if you agree with his assessment of Shaw.

Watch the fancam below (footage courtesy of The United Stand):

But football is about opinions and we hope one day Shaw can prove us wrong and become the world’s best left-back.

Solskjaer has managed the left-back position well this season and Williams is an almighty prospect for the future.