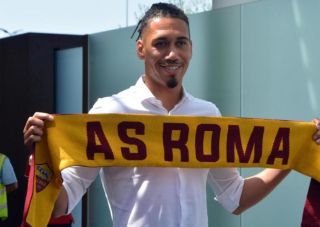 Chris Smalling has proved to be a big hit in Italy since moving from Manchester United and Roma want him to stay beyond this season.

And it sounds as if Roma and Man Utd are in talks over a deal that would see Smalling leave Old Trafford on a permanent basis.

The English centre-back left Old Trafford for the Stadio Olympico in the summer on a season-long loan, but Roma manager Paulo Fonseca wants Smalling to stay long-term.

After falling down the pecking order at United, Smalling finds himself appreciated more at Roma, so it wouldn’t surprise us if he did stay where he is.

“I would like Chris to stay. We are speaking,” Fonseca told Sky Sports.

“I don’t know if it is possible because of the situation with Manchester United, but I would like so much for Chris to stay here with us because he is very important.

“He is a great player, a great man with a great attitude every day and for all of these reasons I would be very happy if Chris stays.”

Roma are also in with a shout of Europa League success and hold an advantage over Belgian side Gent heading to the second-leg of their round-of-32 tie.

Smalling is one of three Premier League stars on loan at Roma — the other two include Chelsea’s Davide Zappacosta and Arsenal’s Henrikh Mkhitaryan, who previously won the Europa League at United.

United should be looking to move Smalling on for the best price, and then put that money towards a defender competing against the England international in Serie A. Kalidou Koulibaly.

The Senegalese defender has been at Napoli for long enough and looks destined for a move this summer.