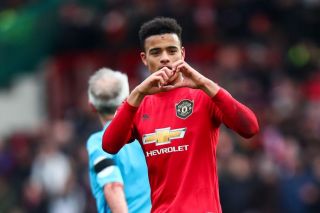 Mason Greenwood scored as Manchester United defeated Watford in the Premier League at the weekend.

New signing Bruno Fernandes has backed the youngster to become a top player but has warned him he still needs to ‘grow up more’ after his incredible breakthrough.

Fernandes believes he has everything required to make it at the top.

“He needs to grow up more, but I think with the confidence he has, the trust we can pass to him, the quality he can become such a good player.”

The Portugal international stole the show again at Old Trafford with a commanding performance that saw him scored his first goal for the club as well as register two assists.

The cooly dispatched penalty showed a player that is on the right stage. He’s making a difference already and we think Fernandes has a very bright future ahead of him at Old Trafford.

Fernandes added: “The fans are amazing and give me more confidence to play, and to be happy when I play. But also part of this is from my teammates. They help me a lot and they give me a lot of confidence. They put trust in me and this is the most important for me.”

And youngster Greenwood is impressed by the quick adaptation of Fernandes.

He told the club website: “Bruno’s a top person. He helps the team in every way possible both attacking and defending. It is great to have him at the club. It is great to see him playing at Old Trafford and score his first goal. I am sure there is going to be more of that.

“It looks likes he has been here for years and he’s settled in nice and sweet. He is part of the group now and part of the team.”