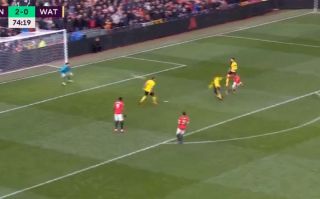 Mason Greenwood loves scoring goals and he’s done just that with a cracking finish against Watford.

It’s currently 3-0 to the Red Devils — with Bruno Fernandes and Anthony Martial also getting their names on the scoresheet.

Greenwood bursts into attack mode in their half and carries the ball into their half before passing to Bruno Fernandes, who later returned the favour by assisting the academy graduate for United’s third goal of the day.

Watch the goal below (footage courtesy of RMC Sport):

A good day for United who now climb to fifth in the Premier League standings.