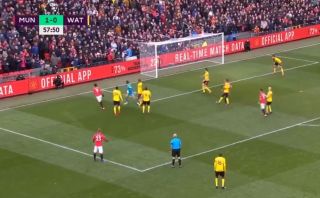 Easily one of the most frustrating players at United, Martial has tons of ability and we witnessed some of it again today with his chipped goal against Watford.

Bruno Fernandes picked the ball up in a deep position before playing Martial in.

The Frenchman’s first effort on goal was stopped by Foster, but after reclaiming possession of the ball he went again. This time a cheeky dink over the keeper and into the net.

Watch the goal below (footage from S10 Live & RMC Sport):

Fernandes playing a role in another goal and we’re sure this will count as an assist for the Portugal international.

The likes of Martial are already benefiting from having Fernandes around.