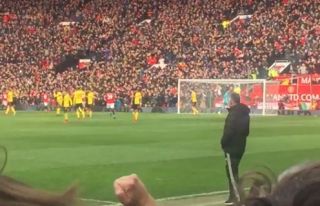 The Portugal international not only put his penalty away with a cool finish, he won the penalty too after being fouled inside the box by former United goalkeeper Ben Foster.

Fernandes has been Man Utd’s best player in the final third — constantly looking for the ball, making runs and getting his name on the scoresheet before half-time.

A fan at the match recorded the penalty and the footage offers an alternative view of Fernandes’ penalty, as seen below:

My view of Bruno Fernandes’ Penalty vs Watford from r/reddevils

A win today would lift United to fifth in the Premier League table.

Watford just had a good ruled out by VAR for handball.