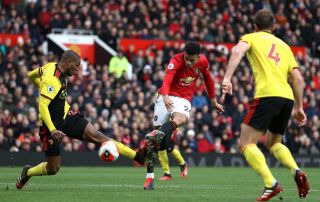 There are reasons for Manchester United fans to be cheerful this season, even if we still sit outside of the top four with Champions League qualification far from certain.

One of the positives this term has been the emergence of Mason Greenwood and he has set another record after his goal against Watford on Sunday afternoon.

The 75th-minute strike was Greenwood’s 11th off the season in all competitions, more than any Premier League teenager this season!

This is further proof that United have continued their tradition of producing some of the best young players in world football, and we believe Greenwood is becoming exactly that.

11 – Mason Greenwood has scored 11 goals in all competitions this season, the most of any Premier League teenager. Elementary. pic.twitter.com/VQ3xkHhw10

If Greenwood can develop into a good rounded player, he has such a bright future ahead of him. He is a ridiculous finisher for such a young lad.

Never frightened to take on players either, Greenwood will shoot if he gets half a chance and more times than not it hits the back of the net, as the stat above suggests.