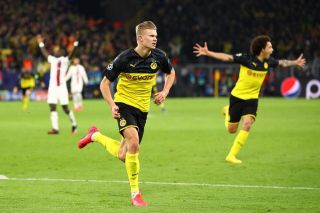 Sheer arrogance from the Liverpool manager but he goes on to make a very good point about why Haaland decided to join Dortmund over other clubs.

The talented Norwegian was Europe’s most wanted youngster in the January transfer window and it was a surprise when BVB beat United to his signature.

Especially with Ole Gunnar Solskjaer’s connections with the striker, having coached him at Molde when he first became a professional. That saw United heavily linked with making a transfer.

However, it ended up proving to be not a major factor in his move as BVB won the race for his signature.

Many have criticised the United board for failing to sign Haaland, but in hindsight I think the club should steer well clear of players associated with Mino Raiola.

The Italian agent can’t be trusted to keep his mouth shut and he tried to publicly embarrass Solskjaer on social media not long ago.

“He wanted a top team, as soon as possible, with an open space… Borussia Dortmund. That’s timing.

“I hope you know how much I love and respect the people at Dortmund, but it’s not that they made a perfect approach and did this and that, it was more they were there, had the space, number nine… here we go, you are 19-years-old, want to play Champions League, top end of Bundesliga, so go for it. Nobody else had a chance, I’m pretty sure, no matter what they say.”

It could be argued that United had the space too, but Haaland wants to play in the Champions League which is something Dortmund can offer…

United signed Odion Ighalo on loan for six-months instead.