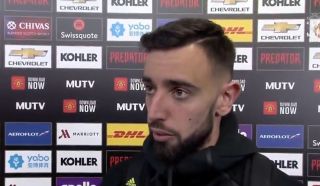 Bruno Fernandes opened his account for Manchester United with an audacious first-half penalty at Old Trafford and had a hand in Anthony Martial and Mason Greenwood’s goals as the Red Devils won 3-0 to climb to fifth place in the Premier League.

Man Utd have won back-to-back league games for only the third time this season, and now we must go on a winning run to remain in the fight for the Champions League spots. There are 11 games remaining and United are away to Everton on Sunday.

The Portugal international looks a proper United player, and I’d go as far as saying an instant hit. It’s such a heap in the right direction from watching Jesse Lingard and Andreas Pereira.

Speaking to MUTV after the match, as seen in the video below, Fernandes thanks the Old Trafford faithful for giving him more confidences and making him happy.

Bruno Fernandes: "The fans are amazing and they give me more confidence to play and to be happy."pic.twitter.com/FPgEUSJdlw

Fernandes was very good again today and Solskjaer believes his latest performance was evidence he possesses all of the attributes of a Manchester United player.

“In today’s market I think we got a good deal,” Solskjaer said in his post-match press conference (via Sky Sports). “He has come in and done really well, given everyone a boost, that means more than getting a player in.

“He has done something to the crowd. You can see with the supporters, they are used to players with that personality, mentality and quality, all the attributes of a Manchester United player the fans have seen many, many times before.

“From day one, the first minute, he has felt like a presence in the group, demanding the ball from his first training session. Some players take time warming up, but he felt confident straight away.

“He’s a bit of a mix between Scholes and Veron to be fair, the temperament of Veron and a lot of the quality of him and Scholes.

“He has done fantastically. He is showing his personality, he’s a Manchester United character who wants to step out at Old Trafford, wants the ball all the time, wants to control the rhythm, help out his team-mates and conduct the play. The way he took the penalty was fantastic.”