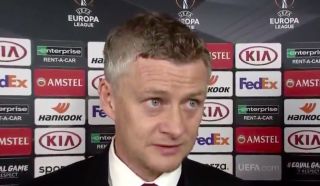 Ole Gunnar Solskjaer says conditions played a key factor as Manchester United came away with a 1-1 draw against Club Brugge in the Europa League first-leg.

It’s now all to play for at Old Trafford in the second-leg, but the Reds will feel confident that they can progress after Anthony Martial’s vital first-half away goal.

Solskjaer was understandably not entirely happy with the performance, with his side often caught out from their own lackadaisical defending.

United pushed for a winner late on – with the impact of Bruno Fernandes making the Reds a much more threatening proposition going forward.

Solskjaer’s decision to remain with his five-at-the-back system that was effective in Monday’s victory at Stamford Bridge perhaps inhibited his players tonight, with United often lacking urgency and numbers in attack.

The Reds return to Premier League action at home to Watford on Sunday.

Listen to Solskjaer’s post match thoughts courtesy of MUTV, where he praises Martial for netting the crucial away goal.