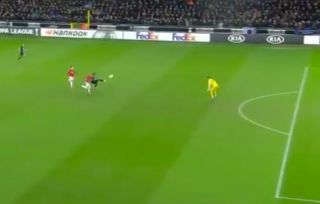 Manchester United have made the worst possible start to their Europa League tie against Club Brugge.

Ole Gunnar Solskjaer has made six changes for tonight’s game and the Reds are already on the back foot against the Belgian outfit.

And from the most innocuous circumstances, United have fallen behind in the opening exchanges. 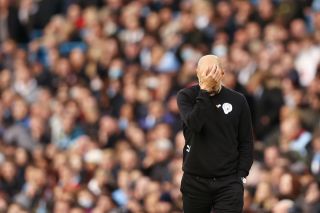 Former Liverpool goalkeeper Simon Mignolet’s goal-kick somehow made it past each of United’s three central defenders and Sergio Romero was caught off his line.

Brugge forward Emmanuel Dennis lobbed Romero expertly to give the home side the lead.

Dennis has been linked with a move to Old Trafford previously and showed his goalscoring prowess here.

It transpired that United should have actually had a corner after Nemanja Matic had his cross blocked but there can be no excuses for a goal that could have so easily been avoided.

Lackadaisical defending has left the Reds with work to do in Bruges.

See the goal below, courtesy of BT Sport:

He now has goals vs Man Utd and Real Madrid this season 👀 pic.twitter.com/6mxckQbfI5