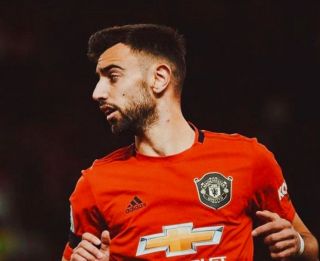 In Bruno Fernandes, Ole Gunnar Solskjaer has a real player on his hands…

The United boss decided to rest the Portugal midfielder among six changes to his side that faced Club Brugge in the Europa League first-leg tie this evening.

United will be content to come away from the Jan Breydel Stadium with a draw and the crucial Anthony Martial away goal still makes them hot favourites to go through with it all to play for at Old Trafford next week.

But you can’t help but feel Solskjaer would have saved himself a lot of hassle by starting Fernandes this evening.

The midfielder was introduced in the 81st minute of the match, with United passive and not positive in possession.

He immediately revitalised the side with some much needed urgency, enthusiasm and quality on the ball.

It is not distorting the issue by suggesting Fernandes offered more in the brief period he was on the pitch than Andreas Pereira and Jesse Lingard did in 80 minutes.

Of course, its far too early to judge whether he will be a hit or miss at Old Trafford, but the early signs are so promising.

Fernandes already seems to give United identity; a sense of fluidity to their play, admittedly helped by the energy of Fred who also came on from the bench.

His cleverness on the ball is what is so incomparable to Andreas Pereira and Jesse Lingard. Fernandes knows when to deliver the right pass, and which pockets of space to find himself in where he can be most effective.

Unlike Fernandes, we very rarely see Lingard or Pereira, who were supposed to be two of United’s attacking outlets tonight, on the half turn and creating opportunities.

The pair are often let down by their touch or a simple pass which makes it so difficult for United to create any momentum in transition.

Fernandes’ impact in his short spell could not provide the key moment of brilliance for the winner, but it gave United fans another exciting glimpse into the future.

See Bruno’s stats from his cameo below, courtesy of Statman Dave:

Bruno Fernandes has taken 3 shots vs. Club Brugge, more than any other Manchester United player.

Got stuck in quickly. 👀 pic.twitter.com/bochdb66Vt