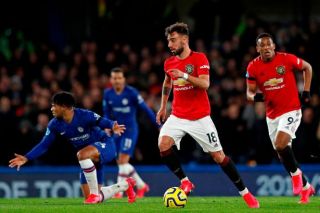 We’ve been reading a lot about Bruno Fernandes since he joined Manchester United. He’s got a character about him which shows there’s more to him than being a brilliant footballer.

While the Portugal international has yet to score for United, he has shown willingness to get forward and shoot from distance whenever an opportunity opens up.

Fans will be hoping he can show more end product against Club Brugge in the Europa League.

There was a different in opinion over whether he will score tonight, as seen in the screenshot below:

It’s rare to see a player be so direct and willing to engage on Twitter — partly because it can always come back to bite you, but this is just Fernandes having a bit of fun.

Fingers crossed we’ll be interacting with bigger clubs next season in the Champions League.

We can do that by finishing in the Premier League’s top four or winning the Europa League.

The problem for United this season has been inconsistency, so we can’t say we’re overly confident about our chances, so let’s take each game as they come…