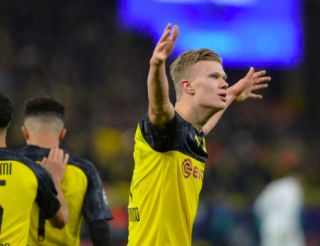 The Norwegian starlet netted twice in the 2-1 victory, taking his tally for the German side to eleven goals in seven games.

He has now scored 39 goals this season including six hat-tricks; it’s hard to put into words just how remarkable his record is for a player that is just 19-years-old.

The £17m fee Dortmund signed him for from RB Salzburg must already appear the transfer deal of the decade.

At one point last month, it seemed inconceivable to many United fans that the club would miss out on Haaland.

The striker had ties to manager Ole Gunnar Solskjaer, was ready for a big move, and was clearly on United’s radar as Romelu Lukaku’s long-term replacement.

But as it turned out, United had to bite the bullet and look elsewhere.

Nobody is disputing just how prolific Haaland could have been in the Premier League; his agent, Mino Raiola is the real problem.

The circus that is Raiola has been undermining United for years and it’s time to cut all ties with the Italian.

Raiola’s farcical statement concerning Solskjaer’s treatment of Paul Pogba just minutes before the Reds were set to kick off against Chelsea on Monday was the latest toxic turn in the club’s relationship with the agent.

United need to cut all ties, and Solskjaer will know that will begin with getting rid of his World Cup winning midfielder.

And as explained by journalist Sam Pilger, Raiola controlled Haaland would have needed a release clause in his contract if he was to move to Old Trafford.

Raiola is renowned for constantly facilitating bigger deals for his players and earning riches in the process.

Rather like with Pogba, United would have had no control over their striker, and he could leave within a season if his buyout clause was met.

United need to start acting like a big club again and being diminished by the same agent again is not the answer, despite Haaland’s brilliance.

Despite the fact Raiola has a plethora of talent in his paddock, it’s best that United stay well clear of the destructive agent in the future when assessing potential transfer targets.

Don't care if Haaland scores 50 goals a game, I don't want United associated with Raiola, United don't have to sign every single good player in the world, every other football team needs players too. You can appreciate a talent without criticising United all the time.

It is uncomfortable for #MUFC to watch Haaland’s impact at Dortmund, but they had to refuse a release clause in his contract, as they would have lost all control over his future. It would have made him a short-term player who could be sold without their permission. 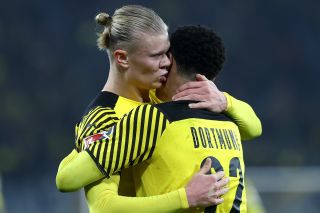