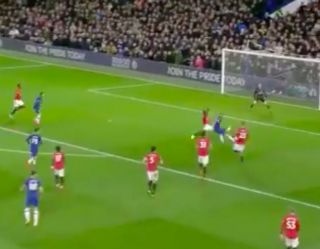 Victor Lindelof’s illness meant that Ole Gunnar Solskjaer had to throw Eric Bailly into the deep end against Chelsea on Monday.

Solskjaer was determined to stick with the five-at-the-back formation that defeated Frank Lampard’s side in the Carabao Cup earlier in the season.

Therefore, Bailly was selected in a United starting eleven for the first time this season, alongside Luke Shaw and Harry Maguire at the back.

The Ivorian has been plagued with injuries since joining from Villarreal in 2016, but we were given a timely reminder of his true defensive qualities at Stamford Bridge.

Granted, the 25-year-old made a nervy start, but he soon settled in and looked remarkably comfortable upon his return. Perhaps even too comfortable at times as he pulled off a ridiculous stepover skill in the box.

Bailly’s block to keep out Matteo Kovacic’s strike was a pivotal moment in the match, and he covered huge ground to make several other notable interceptions on the night.

The 25-year-old deserves to retain his place in the team against Club Brugge in the Europa League on Thursday.