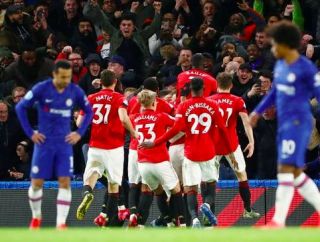 Alan Shearer has named three Manchester United representatives in his Premier League team of the week.

The Reds defeated Chelsea 2-0 at Stamford Bridge, as they kept alive hopes of a top four finish.

United now sit 7th place in the league but are now just three points from Monday’s opponents in the Champions League places.

Newcastle legend turned Match of the Day pundit Shearer has given Ole Gunnar Solskjaer the manager of the week after masterminding a third straight victory over Frank Lampard this season.

The United manager often comes under criticism for his results against the lesser teams, but you cannot dispute his record against the so-called bigger sides.

Meanwhile, Shearer has opted for two of United’s back-three in his side rather than any attacking players.

Harry Maguire unsurprisingly makes the team after rounding off a fourth consecutive clean sheet with a header to secure the three points.

The United captain was perhaps fortunate to stay on the pitch after an early altercation with Chelsea forward Michy Batshuayi, but marshalled his defence well in the second-half as the Reds held on for three points.

Eric Bailly is also named in Shearer’s team and must be given huge credit on his long-awaited return from injury.

Making his first start of the season, the Ivorian was imperious, making a sensational last-ditch challenge and covering ground to make several other notable key interceptions.

Bailly is erratic at times and looked nervy in the opening exchanges at Stamford Bridge. But if Solskjaer can manage to keep him fit, Victor Lindelof has some serious competition to partner Maguire at the back.

Check out Shearer’s team of the week in full, courtesy of the Premier League: