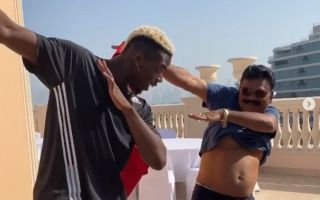 It may be kicking off in the UK with Paul Pogba’s mouthy agent trying to publicly embarrass Manchester United, but the midfielder seems to be enjoying his recovery in Dubai.

Pogba has hardly featured for the Red Devils this season — making just eight appearances — due to an ankle injury, yet off the pitch he’s still creating a circus-like atmosphere around the club.

Mino Raiola caused a stir with an Instagram post he also shared on Twitter where he outlined Pogba is not prisoner (owned by United) and that Ole Gunnar Solskjaer has more to worry about at the moment, which was presumably a dig at his job.

But check Pogba out below as he can’t help but laugh at his encounter with a fan, who requests to have his United shirt signed by the French midfielder.

Good to see Pogba is having such a good time while his agent behaves like a child to drag United through the dirt.

We are over all of this and simply want Pogba moved on as soon as possible.