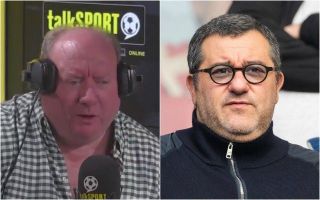 The talkSPORT host tells the Italian agent to “get stuffed” as he’s trying to take the mickey out of a great club.

This would have been great to see with Brazil and Raiola in the same room. It’s about time someone put the latter in his place, and this would be more than your average heavyweight clash.

Watch the rant below (via talkSPORT):

"Manchester United are a massive football club and he is taking the mickey out of them." 👎

"If they got £100m [for Pogba], drive him to the airport." @AlanBrazil on Mino Raiola's comments about Paul Pogba and Ole Gunnar Solskjaer. 🔴 pic.twitter.com/rDem5Q2WEp

While there is no denying that Raiola is good at his job, he’s a mouthpiece and he creates issues when his players want a move.

It may be time for United to consider never working with him again.

Even if the likes of Erling Haaland becomes available, it’s a big no from us if he’s still represented by Raiola when the time comes to leave Borussia Dortmund.

It’s a circus whenever Raiola is around.