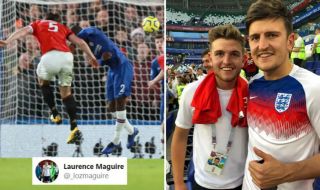 Harry Maguire’s younger brother has revealed that the Manchester United skipper had predicted he would score in a text message prior to match.

The England international scored United’s second goal in the crucial 2-0 win over Chelsea at Stamford Bridge. It was his first in the Premier League for the club following his summer arrival from Leicester City.

Laurence Maguire, who plays for non-league Chesterfield, posted a screenshot on Twitter of two messages from his brother.

READ MORE: Paul Pogba is no more than a wet cigarette lighter at Man Utd

Having been told that set piece would be a chance of him to score, with Chelsea rather subject when it comes to defending them, Maguire replied, “Yes I’m going to score around back tonight. Watch [sic].”

Maguire even specified it would be from an in-swinging corner and he was right!

Hopefully the first of many!