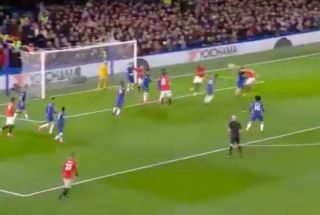 The United captain took a while to open his United goal account but got off the mark against Tranmere in the FA Cup before the winter break.

And his second for the club came in trademark fashion, as he powerfully aimed his header into the bottom corner past Chelsea goalkeeper Willy Caballero.

The United captain can perhaps count himself lucky to be on the pitch after kicking out at Michy Batshuayi in the first-half.

Anthony Martial had given Ole Gunnar Solskjaer’s side the lead on the stroke of half-time with a glancing header.