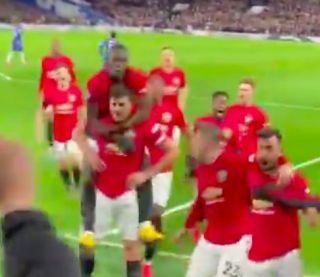 Manchester United fans were in fine voice as always as the Reds defeated Chelsea 2-0 at Stamford Bridge.

It was a crucial victory for Ole Gunnar Solskjaer’s side, who move within three points of tonight’s opponents in the Champions League places.

This win will provide a huge confidence booster for the Reds, who now enter a crucial period of eleven games in six weeks.

Harry Maguire’s bullet header secured the win in the second-half, after Anthony Martial had given United the lead.

The Reds rode their luck with two disallowed Chelsea goals, but did enough on the night to secure their third victory over Frank Lampard’s side this season.

One fan perfectly captured the moment of Maguire’s goal; from Bruno Fernandes’ first assist to the fantastic celebrations in the aftermath.

See the video in the away end below: