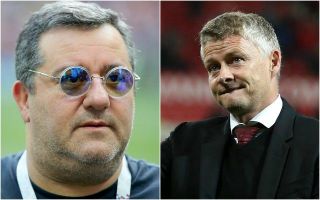 Ole Gunnar Solskjaer refused to be drawn on Mino Raiola after Manchester United’s 2-0 win over Chelsea on Monday night.

The focus tonight should be on the victory, not some big-mouthed agent trying to create issues for the manager and his main client, Paul Pogba.

But we don’t blame the Sky Sports reporter for asking about Raiola’s latest comments which were posted on social media ahead of kick-off.

Paul is not mine and for sure not Solskjaer’s property, Paul is Paul Pogba’s. pic.twitter.com/CvBHW8mj8U

READ MORE: Video: Solskjaer dismisses Maguire kick out at Batshuayi as attempt to protect himself

As we noted here, it all stemmed from initial comments made by Solskjaer, though they could hardly be taken as an aggressive dig at Raiola, who seems very sensitive at the moment.

Watch Solskjaer’s post-match interview below, as per Sky Sports:

"I don't need to comment about Mino, I can speak to him myself"

Sensibly, Solskjaer did not add fuel to the fire. Why should he have to focus on Pogba or Raiola tonight after watching his players get a big win over Chelsea in the fight for top four?