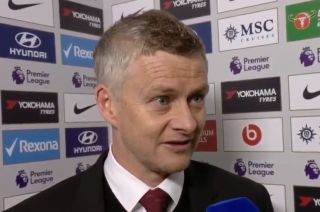 Ole Gunnar Solskjaer was happy with his players after Manchester United kept their fourth clean sheet on the bounce, in a 2-0 win over Chelsea at Stamford Bridge.

The manager was also pleased with the standard of goals scored. Anthony Martial finally found himself in the box waiting on a decent cross, and thankfully Aaron Wan-Bissaka was able to deliver in the first-half.

Solskjaer feels United were too negative before the interval and looked a little leggy. With the Europa League clash against Club Brugge on Thursday night, the boss raised questions over why we didn’t have this game on Saturday instead of Monday night.

He revealed that there has been jokes made about Harry Maguire’s wait for a headed goal, but we’re grateful that can now end, as will the England international.

The top four race is wide open after United’s win over Chelsea, who are just three points adrift of the Blues in the Premier League standings.

The manager expressed his views on Maguire’s alleged kick out at Michy Batshuayi, dismissing that there was any intent.

🗣"He probably just got his legs where it just hurts" pic.twitter.com/g2XldMGia7