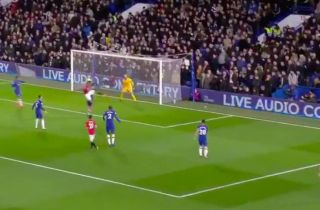 Anthony Martial has given Manchester United the lead on the stroke of half-time with a fantastic header at Stamford Bridge.

The Frenchman has had a poor start to the game against Chelsea, squandering possession and failing to hold up the ball on a number of occasions.

But his perfectly-placed header has given United an important lead going into half-time.

Fred played the ball to Wan-Bissaka, operating in a right wing-back role this evening.

Wan-Bissaka has often come under criticism for his attacking play this season for the Reds but took on Willian before providing the pin-point cross for Martial.

Martial made no mistake with a glanced header past Willy Caballero to give United the lead.