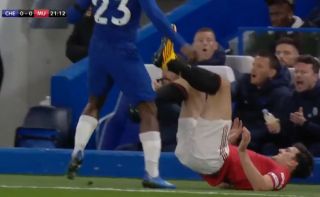 Harry Maguire is one lucky man!

The Manchester United centre-back kicked out at Chelsea striker Michy Batshuayi just over 20 minutes into tonight’s game at Stamford Bridge.

Partnered tonight by Eric Bailly in defence, it looks like Maguire is taking tips from the rash Ivorian on how to get at opponents by kicking them.

Jokes aside, Maguire could have seen red for kicking out at the Chelsea star. Luckily the referee didn’t even call for VAR.

Watch the clip below, courtesy of Sky Sports Premier League:

Has Harry Maguire got away with one here? 👀

He would have been off the pitch before the interval making United’s task more difficult.

A silly kick out it has to be said.