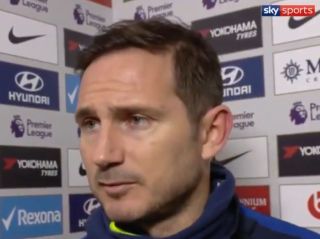 Right in front of the Blues bench, Maguire clashed with Chelsea striker Michy Batshuayi, who had an absolute mare in the game.

It wasn’t a great match — performance wise for either side — and from a tactical point of view, it looked like the two managers are out of their depth, which shouldn’t come as a big surprise to anyone.

The incident that has Lampard outraged saw Maguire fall to the ground after coming off the pitch and he appeared to kick out at Batshuayi, though the United man has played down claims he kicked out.

“I thought he was going to fall on me. It was a natural reaction”

However, Lampard disagrees and says Maguire holding his hands up pleading innocence and being an England international aided his cause.

“Harry Maguire should have been sent off… Azpilicueta is shoved”

Lampard has seen lots of dodgy decisions go Chelsea’s way down the years. How about when John Terry spat on Carlos Tevez in the 2008 Champions League?

Looking back at the kick out, Maguire doesn’t need to raise a second leg to protect himself, and should really have been sent off.

But in football decisions go your way or against you. It’s never been any different. If Maguire was to do that on Thursday night against Club Brugge he’d more than likely see red.