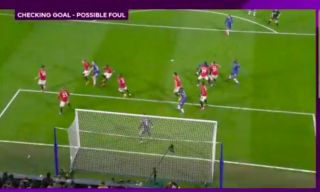 Chelsea have controversially had their equalising goal against Manchester United chalked out by VAR at Stamford Bridge.

Frank Lampard’s side had thought they’d drawn level but Cesar Azpilicueta was deemed to have pushed Brandon Williams in the build up to the goal.

But following a VAR review, it was decided that Azpilicueta made enough contact to cause a foul.

There had been some suggestions Fred had pushed the Chelsea defender into Williams, but this wasn’t the case

Ole Gunnar Solskjaer’s side took the lead on the stroke of half-time with a brilliant header from Anthony Martial following a splendid cross from Aaron Wan-Bissaka.