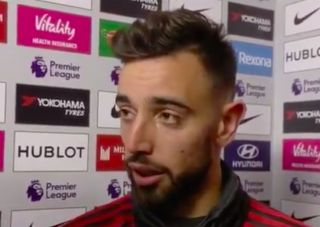 Bruno Fernandes was delighted with his first victory in a Manchester United shirt against Chelsea at Stamford Bridge.

Ole Gunnar Solskjaer’s side defeated the Blues 2-0 thanks to superb headed goals from Anthony Martial and Harry Maguire.

Fernandes assisted Maguire as United doubled their lead, and showed glimpses of class throughout in what was a crucial win for the Reds.

United have now moved to within three points of tonight’s opponents in the Champions League places, and can close the gap further with victory over Watford at Old Trafford on Sunday,

Fans will not be getting carried away with this victory as United rode their luck at times and could have easily had captain Harry Maguire sent off in the first-half after an altercation with Chelsea striker Michy Batshuayi.

But this is Solskjaer’s third win over Frank Lampard this season, and in Fernandes, United have a midfield of serious quality among their ranks.

The Portugal midfielder made several impressive interchanges with Martial this evening, and came close to scoring his first goal with a free-kick.

And we love what he said in his post-match interview after the game, as he stated that he is now playing for the biggest club in England.

See his interview below, courtesy of Sky Sports:

Bruno Fernandes on getting his first win for Manchester United…

🗣" I play for the biggest club in England" pic.twitter.com/MjXnKkLlDd