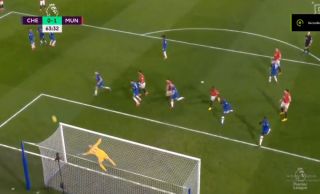 With an assist for Harry Maguire you can say the Portugal international is already delivering, and his all round impact on the game tonight has been impressive.

United are currently 2-0 up, but before Maguire’s brilliant header Fernandes came super close with a free-kick.

Fernandes likes to shoot from distance and we know now that he has the ability to hit from dead ball situations.

Watch the free-kick below (footage courtesy of DAZN):

Unfortunately, we’ll have to wait a little longer for his first United goal but long may the assists continue.