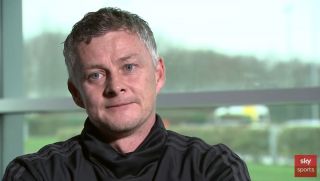 It starts with how he returned to the club as manager after being legend amongst the fans at Old Trafford.

The Man Utd boss was asked to use three words to describe himself. He picked: loyal, delegator, approachable.

Solskjaer explains that he is a “club man” and laughs before noting that counts as two words. The reporter helped by suggesting the world ‘loyal’.

By saying he’s a delegator, Solskjaer says he consults experts in different fields before making a decision, and insists he doesn’t micro-manage his players.

Then being approachable, arguably one of the most important aspects of modern coaching with more players needing an arm around the shoulder these days. He likes his players to feel as though they can approach him with anything which comes down to trust as well as being honest and open.