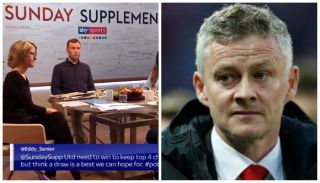 ESPN football journalist Mark Ogden is of the view that Manchester United fans would have no problem with the club sacking club legend Ole Gunnar Solskjaer, as discussed on the latest screening of Sky Sports’ respected Sunday Supplement programme.

It still seems unlikely that Man Utd will make a managerial change at this point of the season, unless the man they might want in charge is available and wants to takeover now as opposed to the summer.

We think a decision depends on how strongly United finish this season.

Solskjaer will find it extremely difficult to defend his corner if the Red Devils fail to qualify for the Champions League, which, as things stand, looks very likely.

But with the board currently under fire, is it more difficult to sack a club icon?

My biggest concern is we won’t see any or much change regardless of who is in the hot seat. We will still need investment and the right recruitment strategy.

In terms of making the actual decision to move Solskjaer on, Mark Ogden spoke on the Sunday Supplement and said the fans would accept that:

"The fans aren't the stupid. They realise this is a guy that got Cardiff relegated and spent the rest of his career managing in Norway. It's not good enough."@MarkOgden_ says Man United fans would have no problem with the club sacking legend Solskjaer. pic.twitter.com/si2FVV8PrG

Of course, this is a huge job we are talking about and Solskjaer was never qualified to manage at this level before he was made permanent manager in March. He did well as caretaker but the high hopes were short-lived.

Ogden compares our situation to when Liverpool came to the conclusion it was time to move Kenny Dalglish on in 2012. Nobody can argue he was the right man for LFC, even though their fans love Dalglish and regard him as one of their greatest players.

So, I think most United fans can respect Solskjaer being a club legend but accept as a manager his time is running out.

And there’s nothing I would enjoy more than be proved wrong on this, with Solskjaer turning things around and beating Liverpool in next season’s Champions League final.