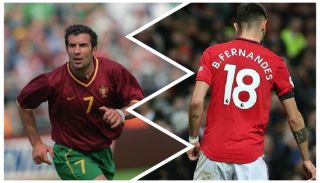 Fernandes joined Man Utd in January on a five-and-a-half-year contract from Sporting Lisbon and is expected to make his second appearance for the club later today, against Frank Lampard’s Chelsea.

Time will tell if he can prove to be a good acquisition, but Fernandes is a player United fans are excited to have signed and we think he’ll be a hit.

Figo believes the 25-year-old is a “good buy” for United as there is a shortage of talented players in current generation.

“He is a different player, he is not a striker [but] a midfielder,” Figo told Sky Sports ahead of the Laureus World Sports Awards. “In these days the market is not so big so it is different o find players because everyone is looking for that and the production of talent is not as huge as in other generations.

“So sometimes you have to buy different players.”

That seems like a bit of a dig at the current crop of players coming through the ranks throughout world football, though we’re not saying he’s wrong. We’ve been lucky enough to have witnessed both Cristiano Ronaldo and Lionel Messi over the past decade, so I’m not sure we ultimately agree with Figo as the modern game is producing players with different qualities.

Fernandes scored 63 goals in 137 games for Sporting. He’s coming to United with pedigree.

Figo continued to add that success for Fernandes will depend on how quickly he adjusts to English football: “He is one of the best football players in Portugal. He is in the international team, a midfielder that can score. He has the quality to [score a] goal and to be in the box.

“I think it was a good buy, I just hope that he can adapt as soon as possible to a different league.”

Fernandes adapted to football in Italy and became fluent in Italian after a month living there. If he can settle as quick in Manchester, he has every chance of succeeding.

While United took their time haggling with Sporting over transfer fees, Fernandes can now finally focus on his developing his game to suit the Premier League, and he put in a good shift against Wolves already.