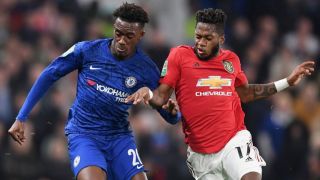 We asked Will Faulks, editor of Chelsea Talk about his thoughts on the game, summer spending, and United’s battle with Chelsea for a Champions League spot.

1. It was confirmed on Thursday that Ajax star Hakim Ziyech is to become Frank Lampard’s first signing as Chelsea manager. Not a bad deal either at £33m! Do you think Roman Abramovich will spend big in attempt to take the title to Stamford Bridge again?

I don’t think it’s going to be too crazy, certainly not as crazy as it could be given we went two windows without signing anyone. But there’s no doubt major changes are needed, and I think at least two first team players will be coming in this summer, in addition to Ziyech. I would be surprised if we spend less than £150m or so, for sure – but there will be at least £50m of sales made to balance that out a little.

2. Christian Pulisic missed Chelsea’s last six matches with injury and it remains to be seen if he’ll return against United. How has he performed in his debut season?

Up and down, as you might expect from a young player in a new league. Frank Lampard introduced him gradually and he really impressed for a spell in the Autumn. But even before his injury his form was fading and he was struggling a little. It’s a shame he’s missed this last month – it would have been the perfect time for him to try to force his way back in.

3. Chelsea spent over £70m on Kepa Arrizabalaga in 2018 and he hasn’t looked very good this season. Should you stand by him or cash in/find replacement?

I think the club will bring in an older keeper this summer to compete with him next season. They’ve invested too much to give up now, and trying to flog him in the summer would be a massive indictment of the scouting system as well as the decision makers behind the scenes. It might not be the right call, but I reckon they’ll stick with him for another year.

If we were to get a big offer for him, I think they would take it… I just can’t see anyone offering anything near what we would want.

4. If you could sign one player to strengthen a weakness in the Chelsea side, who would it be?

I’ve been a massive fan of Fabian Ruiz since he made his Real Betis debut, and I was gutted when we signed Jorginho and allowed Napoli to go out and sign Fabian with that money. A dedicated defensive midfielder is what we really need though – could we get Wilfried N’Didi? If not, I think a bargain bid for Jefferson Lerma if Bournemouth go down could be a smart move too.

5. What is Chelsea’s best midfield setup?

Nobody knows, and it’s a big problem. N’Golo Kante, Mateo Kovacic and Jorginho should be a nicely balanced three, but we’ve seen time and again in the last two seasons that it’s too passive. Ruben Loftus-Cheek will add a whole new dimension when he’s back, but until then we’re just changing game to game trying to stumble on something that works.

Not particularly, but as much as we’ve been lucky with the results around us, there’s also a sense that we just need a few things to break our way to start winning games again. Monday’s game is so huge, if we win it I can see us holding everyone off, just about.

1-1. Tammy finds his scoring touch again, but Chelsea let themselves down in defence in the second half and are lucky to come away with a point in the end.

We answered some questions for Chelsea Talk ahead of the game.