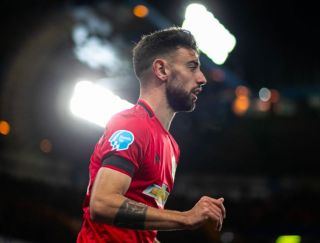 Bruno Fernandes registered his first assist for Manchester United in the crucial victory against Chelsea this evening.

United rode their luck at times, but this is a huge result in the battle for the Champions League places.

Fernandes, playing his second game for Ole Gunnar Solskjaer’s side, has settled in well and looked far more at ease with his teammates after the winter training break in Marbella.

The playmaker made some classy interchanges with Anthony Martial, and his cleverness and tidiness on the ball is not under appreciated by United fans.

Fernandes’ quality on the ball makes United so much more likely to transition successfully in attack, and almost opened his own account with a great effort from a free-kick.

There is still so much more to come from Fernandes and the initial signs are very promising.

He was quiet at times tonight, but always looks reliable on the ball and is capable of a moment of magic at any time.

See his stats from the game, that included three chances created, by Statman Dave: