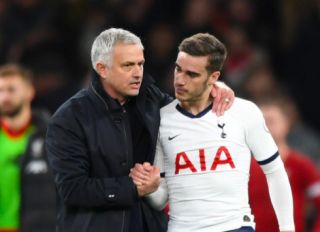 According to the Mirror, the Manchester United manager is resigned to the fact he will lose Paul Pogba, but reinvest some of the money in Winks.

The report claims that Solskjaer believes that he can build a new-look midfield by signing the 24-year-old, alongside Bruno Fernandes who came in last month.

Winks’ contract runs out in 2024 and he would not be let go easily by Spurs boss Jose Mourinho.

An academy product at Tottenham, Winks has made 16 Premier League starts for his boyhood club this term.

He operates in a deeper lying midfield role, where he can dictate play with his passing ability and awareness on the ball.

Although he is perhaps not a star name, it would certainly make sense that Solskjaer is interested in his signature.

Winks fits the mould of young exciting British talent that the United boss wants to recruit at the club.

It is also clear that the midfield will need more investment, particularly with the loss of Pogba.

United have been heavily linked with James Maddison and Jack Grealish in the playmaker role, but are also very keen on Winks if this report is to be believed.