Dimitar Berbatov is well aware of how important Manchester United’s fixture against Chelsea at Stamford Bridge is on Monday night.

The Reds are currently in ninth position, but can go within three points of their opponents in the Champions League places with victory.

Frank Lampard’s side are without a win in their last three league games, and United have defeated the Blues twice already this season. 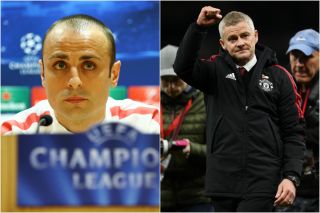 But former United striker Berbatov can not see much difference in quality between the two sides and predicts an even game.

Speaking to the Metro, he said:

“This is a massive game in the race for top four. If United want to be seriously challenging for a top four spot then need to get something on Monday. I honestly think that both teams are pretty even at the moment and both need to do better and become more consistent. 1-1”

We agree that this is a critical game for Ole Gunnar Solskjaer’s sides hopes of Champions League qualification.

The Reds are boosted with new signing Bruno Fernandes, who has now had time to integrate with his teammates during the mid-season training camp in Marbella.

Scott McTominay could also return to action, and loan signing Odion Ighalo may be in line to make his debut at Stamford Bridge.