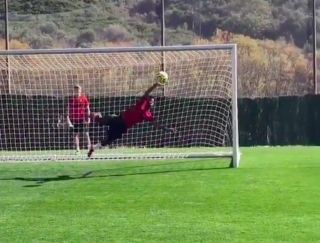 If Angel Gomes wasn’t 5ft 5, then David De Gea may have been looking over his shoulder as Manchester United number one…

In all serious, this is some piece of athleticism from the 19-year-old to keep out Jesse Lingard’s shot destined for the top corner.

Gomes leaps brilliantly and pushes the ball away with his right hand.

Ole Gunnar Solskjaer’s players appeared to be enjoying themselves on the mid-season trip to Marbella.

The Reds are now back in Manchester and return to action on Monday night against Chelsea at Stamford Bridge.

Gomes has not started a Premier League game this season and we do not expect him to be involved against Frank Lampard’s side.

See his save below, courtesy of Man Utd’s official twitter.