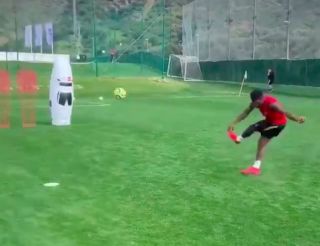 Manchester United fans are still left wondering why Fred was given the responsibly of taking that free-kick at the Etihad.

Ole Gunnar Solskjaer’s side were one goal away from a remarkable comeback against Manchester City, and were handed a great opportunity with a set-piece on the edge of the box.

Bewilderingly, Fred stepped up when Juan Mata was on the pitch.

The Brazilian midfielder has improved greatly over the last few months with a consistent run of games. But shooting is certainly not his forte.

However, Fred has perhaps shown during the warm weather training to Marbella why he was given the opportunity to take the free-kick against City.

He struck a wonderful curled effort into the top corner, in front of an onlooking Bruno Fernandes.

Fernandes, meanwhile, isn’t bad at free-kicks either. We still think our new Portuguese signing should be the taker in matches from now.

See the strike below, courtesy of Man Utd’s official twitter: