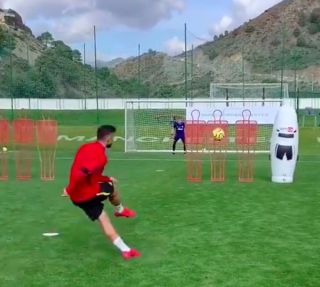 Manchester United are back from their warm weather training camp in Marbella.

The Reds are preparing to take on Chelsea at Stamford Bridge on Monday evening in what is a crucial fixture in the battle for the Champions League places.

Ole Gunnar Solskjaer’s side are currently ninth in the Premier League table, but can move up to sixth with a third victory over Chelsea this season.

During the trip to Spain, United’s players spent some time perfecting their free-kicks.

United are notoriously poor at scoring from set-pieces, but in new signing Bruno Fernandes , Solskjaer has found his new taker.

Fernandes showed his exquisite free-kick technique to his new teammates in Marbella, and surely should be given the responsibility to take them in matches.

We can't take our eyes off this 👀 @B_Fernandes8 🎯 #MUFC pic.twitter.com/cuEqWPFJKw