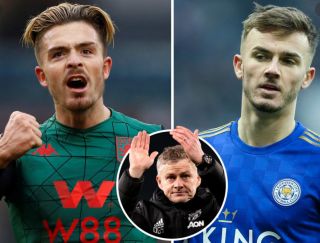 Despite the arrival of Bruno Fernandes in January, Ole Gunnar Solskjaer still needs more quality midfield options within his squad.

The pair have both been touted to make the Old Trafford switch this summer and are having wonderful seasons at their respective clubs Leicester City and Aston Villa.

Maddison meanwhile, has thrived in central midfield under Brendan Rodgers, helping them to third in the league table.

But Parker has concerns about both players coming to United.

“Manchester United need to sign proven players but the one who has proven himself [Maddison] is not going to leave Leicester,” he told the Metro.

“He’s not going to move unless Leicester get offered ridiculous money, like they were for [Harry] Maguire. Leicester couldn’t believe their luck with that one. ‘So you go with Maddison [over Grealish] but can they get a deal? Grealish for me is still potential, there’s been a lot of talk and he hasn’t really done it on a consistent basis.”

There has been a lot of debate from United fans on social media over who is actually the better player. Regardless, Maddison and Grealish would both improve Ole Gunnar Solskjaer’s side greatly.

As reported by Manchester Evening News, the club are considering both players ahead of a possible summer move.