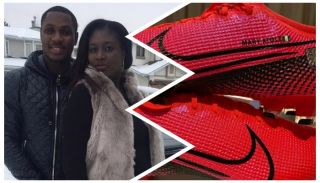 Odion Ighalo is very close to his sister. So close he has Mary’s name inscribed on his football boots.

According to The Sun, it is also etched into a white T-shirt he will wear under his Manchester United jersey he is likely to don for the first time against Chelsea on Monday night.

United’s new loan signing admits he is struggling to come to terms with her sudden death, often crying when he is on his own.

The tragedy occurred in December, and Ighalo has revealed: “I feel very emotional because it has not really struck me that my sister is gone forever and I am never going to see her again.

“Sometimes when I am alone and I just remember her, I have oner sharp pain in my heart.

“My twin sister, Akhere, will call me, crying, saying she misses her and, sometimes when I am alone, I cry too.

“It is a very painful loss but I am trying to be strong as a man.”

Ighalo, 30, posted a picture of himself with Mary on Instagram, announcing her shock death, accompanied by the captain: “RIP sister” with a broken heart emoji.

While getting her children ready for school, Mary Atole (married) collapsed at her home in Canada on December 12. She died aged 43.

Ighalo added: “It was a very painful moment.

“She just collapsed and died before the kids could even call for an ambulance. When the medics arrived they tried to revive her but she was already gone.”

This is heartbreaking stuff we new nothing about. The grief is now shared by Akhere, elder sister Beatrice, brothers Austin and Moses and mother Martina.

“Although she was my old sister, Mary was like a mother to all of us.

“Even when I was young she would look after me. She tried to make everybody happy, make sure everyone was OK.”

Moreover, she was a United fan and had a shirt with her own name on the back, which is hung on the wall of her home.

“My sister was a strong United fan,” he added. “All of us grew up watching Manchester United, we all supported them.

“Mary’s husband followed Chelsea, while their children were Manchester City and Liverpool fans, but she stayed loyal to United.

“She always prayed I would sign for United. Even when she came to watch me in the Premier League playing for Watford she hoped I would join United.

“The painful part for me is that I now HAVE signed for United, but she is not here to see it.

“However, I know she is up there watching me.

“That is why I am going to play with her name on my boots, so she is always with me at Old Trafford for in any game for Manchester United.

“Every goal I score from now until I finish my career will be dedicated to God and to her.

“It means she can feel me playing at Old Trafford, feel that dream we all prayed for, even though she is not here to see it.

“But she will be on my feet, assisting me on the pitch.”

It’s rather upsetting that she won’t get to see her brother play for United a month after passing away, but Ighalo sounds strong and wants to make memories through her name.