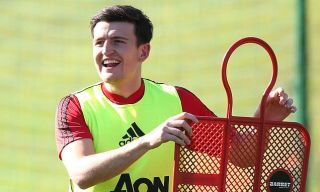 According to an interview on Manchester United’s official website, Harry Maguire has admitted that the Red Devils are ‘poor’ at defending set-plays.

Maguire added that Ole Gunnar Solskjaer’s side have “never really been a team which has conceded a lot of chances.” That’s all well and good but it doesn’t bode well when you’ve reached double figures for conceded goals from set-plays!

That would seem as though the England international is encouraged for the most part by his side’s performances at the back this season, but has left question marks over the team’s ability to defend corners and free-kicks.

It would be interest to hear what he puts that down to following his time at Leicester, and if he thinks coaching is a big factor behind it all.

Maguire joined United in the summer for £80m, as per BBC Sport, making him the most expensive defender ever.

You’d have to say he’s been a mixed bag since arriving, but his leadership skills are clear to see in a squad lacking leaders so it was no surprise to see him appointed as United’s new captain recently.

He is currently joined by Victor Lindelof in the heart of defence but with Axel Tuanzebe returning soon we might see some changes in the team from week to week.

Here’s what Maguire had to say on United’s defence:

“We’re keeping a lot more clean sheets than we were at the start of season and we’ve never really been a team which has conceded a lot of chances.

“We’ve been poor from set-plays with our defending and we’ve had a couple of great goals scored against us from outside the box.

“But we haven’t really been having games where David [De Gea] has had to make five or six saves, apart from maybe the Carabao Cup second leg against [Manchester] City, when David was brilliant.”

The Mirror claim that United have conceded 10 goals from set-pieces this season which is a real shabby record for a side that’s defence is without question stronger than it was a year ago.

We’ve conceded a total of 29 goals in the league so far this season, so more than a third of those goals came from set-pieces.

They should be able to work on that from the training ground but if not, Solskjaer needs to dip back into the transfer market to sign a partner for Maguire.

Napoli’s Kalidou Koulibaly has been linked with a move to the Premier League for some time, perhaps now is the time to make it reality?