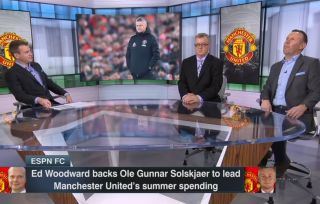 Mauricio Pochettino issued a ‘come and get me plea’ to Manchester United by stating he would love to work in the Premier League again (via Sky Sports), after being sacked by Tottenham Hotspur earlier this season.

There are growing concerns over a top four finish in the Premier League as Man Utd sit eight in the table, showing a lack of consistency and progress under Ole Gunnar Solskjaer.

The fans still back Solskjaer at large, singing his name at games — win, lose or draw — but Pochettino being available throws up a dilemma for the club’s board.

We strongly believe Poch would have replaced José Mourinho if Solskjaer didn’t have that amazing start as interim boss, and now United may look to fix what they should feel was a mistake.

Pochettino’s recent comments have been discussed by the panel on ESPN FC.

Laurens believes Ed Woodward will wait until the summer to act. With three-and-a-half months left to go, the journalist reckons it would be wise to stick with Solskjaer for now.