Manchester United could line-up with a completely transformed attack next season if recruitment is successful.

The so-called rebuild under the Norwegian has so far been slow and disjointed, but needs to be accelerated with United falling even further behind their domestic and European rivals.

United currently sit in eighth position, and look unlikely to qualify for the Champions League for the second consecutive season.

Some of the fanbase are unsure whether Solskjaer will even be given the opportunity to see the job through and spend the Glazers’ money this summer with an elite-level manager such as Mauricio Pochettino waiting in the wings.

But one thing that is guaranteed is United’s necessity to spend significantly to improve what is still a well below-par squad.

The signing of Bruno Fernandes last month was a stride in the right direction; a quality goal-contributing midfielder that Solskjaer can build his squad around.

But with Paul Pogba’s Old Trafford exit appearing inevitable, more players need to be signed to offset the creativity the Frenchman offers in midfield.

According to Manchester Evening News, Solskjaer wants to make at least three major signings this summer.

Aston Villa captain Jack Grealish is a player that is said to be of interest, and this is a deal that looks like it may happen.

MEN report that Grealish has told friends he wants a move to Old Trafford, amid concrete interest from United.

The 24-year-old has spearheaded his boyhood club’s Premier League survival charge this term scoring five goals and contributing seven assists, and deserves a move to a bigger club that can facilitate his wider ambitions.

Grealish is versatile which would allow Solskjaer to operate him in a number of different role’s in his system next season.

Sky Sports report that Sancho is set to leave Borussia Dortmund and is said available for £100m this summer.

United will obviously be extremely keen on the 19-year-old, who has lit up the Bundesliga since leaving Man City for Germany in 2017.

The 19-year-old is the perfect answer to United’s problem of a lack of natural width on the right-flank.

But a deal would be made difficult if Solskjaer fails to qualify for Champions League football, either through winning the Europa League or finishing in the top four.

We hope that the lure of Old Trafford and Sancho’s desire to play in the Premier League can convince the England star to join the Reds this summer.

Here is a potential Man Utd XI for the 2020/21 season if United can get deals for Grealish and Sancho over the line. 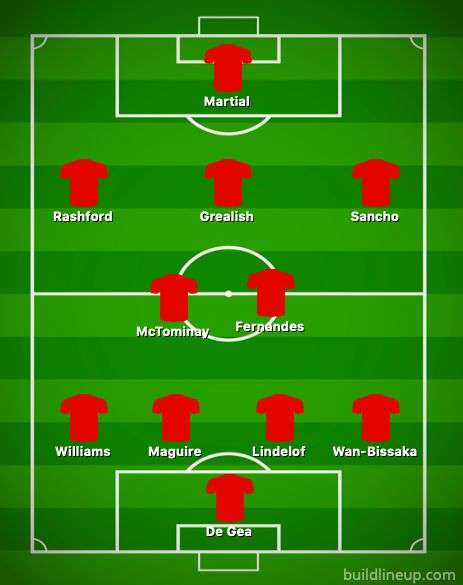