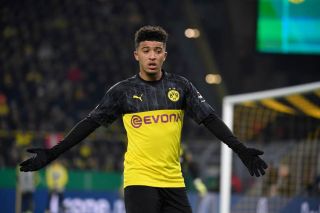 Jadon Sancho he was just 17-year-old when the Borussia Dortmund star left Manchester City in 2017 in hopes of more first-team action. The England international did just that in less than two years, emerging as one of the most exciting young players in Europe, scoring 28 goals in 72 appearances.

Now, Sancho, who is interested in a switch to Old Trafford, is ready to return to the Premier League and it will be expensive for teams to lure the star away from Dortmund.

Sky Sports is suggesting Borussia Dortmund will demand at least £100m for Jadon Sancho this summer, and he will be commanding a lot of attention from multiple teams including Manchester United, Chelsea, and Manchester City.

City have the option to match any bid for Sancho as part of the agreement when he left and means the Bundesliga side have to keep them informed if another club comes in but the cross-town rivals don’t appear to be interested in getting Sancho back.

Sky Sports reporter Jesco von Eichmann said: “He will leave Dortmund this summer, that’s for sure.

“It’s not clear to which club he will change.

“Manchester United is one of the big clubs that are interested, that I’ve heard.”

Michael Zorc, the director of Dortmund, said last week in an interview that he hasn’t had an offer for Jadon Sancho yet, as per Bleacher Report.

🔘 – Manchester United, Chelsea interested in Jadon Sancho
🔘 – Liverpool unlikely to spend so much on a player who they can’t guarantee will start
🔘 – Manchester City’s clause in his contract…

Here’s @SkyKaveh with all the latest on the Borussia Dortmund winger! 🖤💛 pic.twitter.com/QmvEmriibl

Chelsea is also rumored to be looking at Sancho but the transfer price take might be too expensive for the Blues.