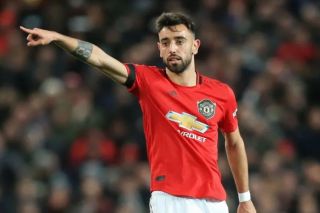 He signed for Manchester United on two days before the transfer deadline after weeks of negotiations.

But Bruno Fernandes still found time to become the Portuguese League’s midfield player of the month for January.

The midfielder’s performances for Sporting Lisbon over the month were good enough to warrant the award.

Fernandes is still adored in Portugal and has been recognised for his efforts immediately before his Sporting departure.

Meanwhile, the 25-year-old has been enjoying some time to integrate with his new United teammates in the warm weather training camp in Marbella.

Ole Gunnar Solskjaer has taken advantage of the mid-season winter break as the Reds prepare for the crucial Premier League game against Chelsea on Monday.

It will be interesting to see how Solskjaer lines up his side at Stamford Bridge with Scott McTominay looking close to a return to match-fitness.

If the Scottish international is available, he may immediately return to the starting eleven in a midfield double pivot with Fred, who has been excellent over the last couple of months.

This would allow Fernandes to roam further forward in a number 10 role where he can be more effective in attack.

A win would move the Reds within three points of the Champions League places.