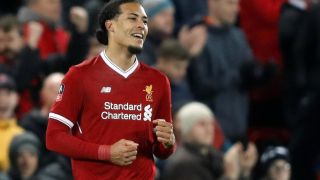 Former Manchester United coach Steve McClaren insists Virgil van Dijk is the only player from the current Liverpool side who would make a combined XI with the Red Devils’ famous 1999 treble winners.

Sir Alex Ferguson’s team won three of the biggest trophies that season — the Premier League, FA Cup and the Champions League — making them the only English side to win the treble.

However, Liverpool fans are getting very giddy with their team on course to winning their first league title in 30 years, and think the current side is the greatest of all-time.

Talk about being delusional.

Jurgen Klopp’s men are also reigning European Champions and have a number of brilliant players, but Steve McClaren doesn’t think many would make United’s treble winning XI, and he’s right in what he says: “Virgil van Dijk next to Jaap Stam, that would be invincible. Nobody would get past them,” he told Sky Sports.

“But for me, seriously, only Van Dijk would get into that team. When you look at that Manchester United team, that is leadership throughout the whole team, and leadership was the key.

“Liverpool are developing that now.”

Great teams go on to win consecutive titles over years. Manchester United did that time and time again, but it’s too early to compare this Liverpool side with us in 1999…

All of this is not too dissimilar to what we saw when Man City started winning Premier League titles under Pep Guardiola. Calls for them being the greatest English side of all-time.

Give me a break!