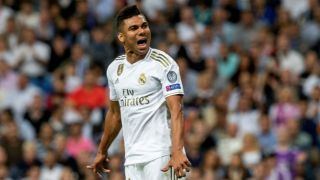 Casemiro’s agent has told Real Madrid that his client wants to stay and sign a new contract, but that he also has tempting offers from elsewhere.

That has been claimed by Don Balon who go on to note that Manchester United, Liverpool and Paris Saint-Germain have all made ‘interesting’ offers for the Brazilian midfielder.

Casemiro has long been a key player for Real Madrid and a favourite under manager Zinedine Zidane. It would be a huge loss to the Spanish giants if he were to leave, but United would benefit massively if they are able to lure him to the Premier League.

There will be lots of movement in the market to watch out for once the summer transfer window opens, especially if you fancy a bet every now and again. Check out Bettingfellow.com for the best tips and prices.

The 27-year-old is one of the best midfielders in the world. It goes without saying that he’d be a massive upgrade on the likes of Nemanja Matic and Fred at Old Trafford, as he’d walk into any midfield in English football at the moment.

That’s why soon-to-be champions Liverpool are said to be interested in signing Casemiro, possibility providing competition for any other clubs that want to sign him.

Casemiro has won four Champions League titles with Real Madrid, as well as other major honours, and his agent may be thinking they could get more money elsewhere.

Don’t be naive. If Casemiro decides to leave Madrid this summer, money will be a huge factor in persuading him towards another club. He will also want to join a team that aims to be winning silverware; league titles as well as the Champions League.

United should be at that level but changes are needed to make this dream a reality.

Obviously, signing players such as Casemiro can only help, but a really effort is required from the board to get things right.

Is Ole the right man? Does he have the right coaching staff? Keep the long-term view of signing young and hungry players, but dress it up with experience and proven quality.

It all comes down to whether the Glazers are willing to make these changes. I’d wouldn’t bank on that, nor would I on Casemiro leaving Madrid.