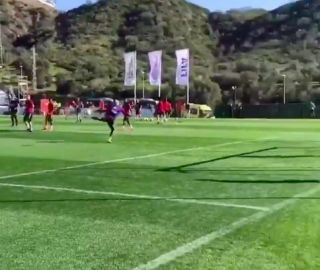 Aaron Wan-Bissaka has been criticised by some for his efforts in attack this season.

There is no doubting the full-backs defensive work; he is arguably the best one-on-one defender in the Premier League.

But work still needs to be done in an attacking sense if he is to become the complete player and challenge Trent Alexander-Arnold as Gareth Southgate’s first-choice England right-back.

In fairness, Wan-Bissaka is too often left isolated on the right-flank and does not enjoy natural width of a winger that he can overlap.

Instead, much of the work has to be done by the youngster himself as he looks to create openings and cause problems with crosses into the box.

Nevertheless, he has has settled in excellently at Old Trafford since his move from Crystal Palace in the summer and is enjoying himself on United’s mid-season training camp.

Ole Gunnar Solskjaer has taken advantage of the winter break by flying out to Marbella for some warm weather training, and players seem in high spirits.

Wan-Bissaka has yet to get on the scoresheet for United but showed his technical ability on Tuesday morning with a textbook volley in a finishing drill.